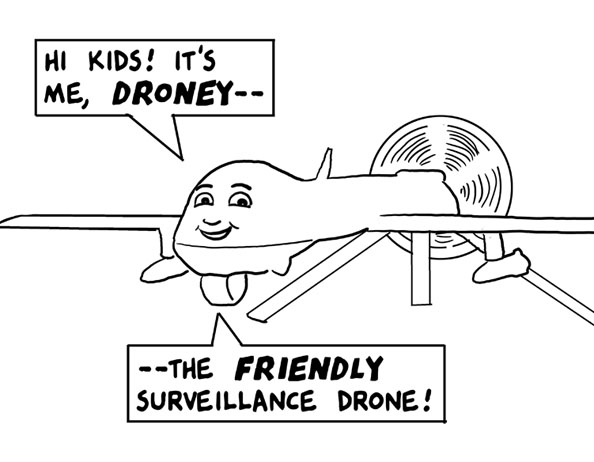 I was working on Droney last night, inspired by this report:

An amendment that would legalize the use of propaganda on American audiences is being inserted into the latest defense authorization bill, BuzzFeed has learned.
The amendment would â€œstrike the current ban on domestic disseminationâ€ of propaganda material produced by the State Department and the independent Broadcasting Board of Governors, according to the summary of the law at the House Rules Committee’s official website.
The tweak to the bill would essentially neutralize two previous actsâ€”the Smith-Mundt Act of 1948 and Foreign Relations Authorization Act in 1987â€”that had been passed to protect U.S. audiences from our own governmentâ€™s misinformation campaigns.
The bi-partisan amendment is sponsored by Rep. Mac Thornberry from Texas and Rep. Adam Smith from Washington State.

Must be something in the zeitgeist, because this morning Salon has an article on the PR offensive the drone industry itself is about to launch:

â€œWeâ€™re going to do a much better job of educating people about unmanned aviation, the good and the bad,â€ said Michael Toscano, president of the Association of Unmanned Vehicle Systems International, the industryâ€™s trade group in Washington. â€œWeâ€™re working on drafting the right message and how to get it out there.â€

Droney will have more to say about all of this in next week’s cartoon.