You may have read about the FBI investigation and arrests of four East Haven, Ct. police officers, not to mention the mayor’s subsequent tone-deaf response. This isn’t the first time the East Haven cops have made the news for racial profiling — I did a couple of cartoons about an earlier incident in which a young man lost his life, back in 1997. (Click to enlarge.) 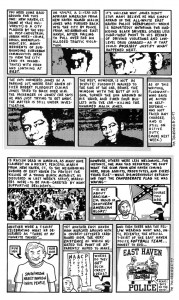 (A recent update on the case here.)

Also: send a taco to the mayor of East Haven.