Nice screen grab from @StopBeck on Twitter, highlighting the hypocrisy of the self-styled heir to MLK. Not a photoshop job — he has a random image generator on his site, featuring various photos of himself. This one of course has since been scrubbed, as have so many of Sarah Palin’s Tweets and Facebook postings. Which is weird since they keep telling us they have nothing to be embarrassed or defensive about. 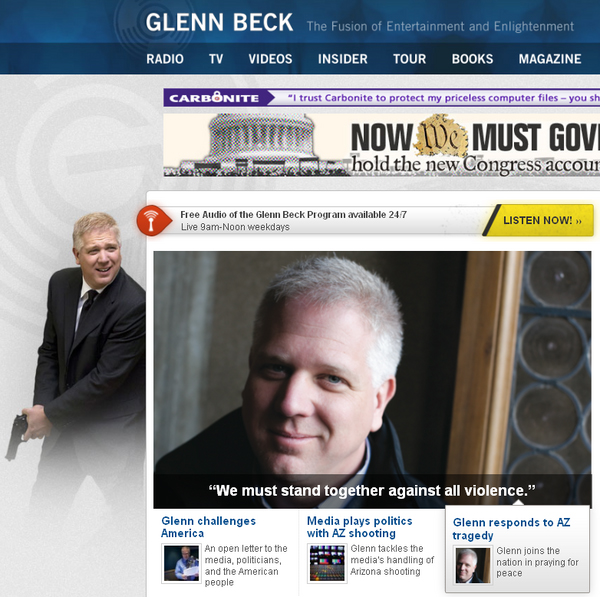 Also: as Beck frantically tries to recast himself as a Man of Peace, I can’t help but remember the time he fantasized openly about murdering Michael Moore.

BECK: Hang on, let me just tell you what I’m thinking. I’m thinking about killing Michael Moore, and I’m wondering if I could kill him myself, or if I would need to hire somebody to do it. No, I think I could. I think he could be looking me in the eye, you know, and I could just be choking the life out — is this wrong? I stopped wearing my What Would Jesus — band — Do, and I’ve lost all sense of right and wrong now. I used to be able to say, “Yeah, I’d kill Michael Moore,” and then I’d see the little band: What Would Jesus Do? And then I’d realize, “Oh, you wouldn’t kill Michael Moore. Or at least you wouldn’t choke him to death.” And you know, well, I’m not sure.