Going up at Easy Street Records in Seattle. (Via their Twitter feed.) 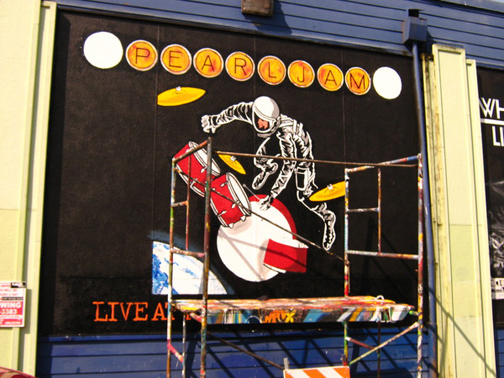 This is all so strange …

also: the cover art comes up in this Q&A on Billboard.com.

Tell me about the artwork that Tom Tomorrow made for “Backspacer.”

Vedder: … We just happened to be talking at the time this came around, and we thought, “We’ll give it a shot and we’ll remain friends if it doesn’t work.” What he did was phenomenal. He put so much thought into it, to the point where we had so many conversations about each drawing, that I said, “Look, I just need a week to write lyrics” (laughs). At the same time, it was invigorating. Certain ideas came from him as far as the overall scope: the randomness, but also the detail. It’s really a cool piece of art.