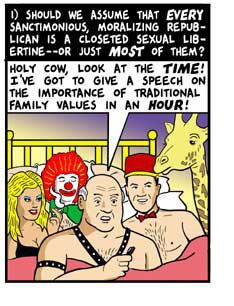 OCTOBER 8â€“An Alabama minister who died in June of â€œaccidental mechanical asphyxiaâ€ was found hogtied and wearing two complete wet suits, including a face mask, diving gloves and slippers, rubberized underwear, and a head mask, according to an autopsy report.

Investigators determined that Rev. Gary Aldridgeâ€™s death was not caused by foul play and that the 51-year-old pastor of Montgomeryâ€™s Thorington Road Baptist Church was alone in his home at the time he died (while apparently in the midst of some autoerotic undertaking). While the Montgomery Advertiser, which first obtained the autopsy records, reported on Aldridgeâ€™s two wet suits, the family newspaper chose not to mention what police discovered inside the ministerâ€™s rubber briefs.

… and more at Hullaballoo, including an extraordinary graphic from the website of the Rev’s church.