In light of the question posed in this week’s cartoon, Jack Hitt passes along yet another example of what has become an entirely predictable trend: 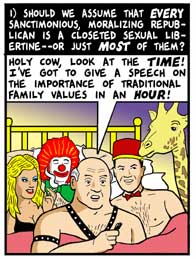 JOHNSON CITY, Tenn. (AP) – The minister of a Baptist church has been charged with indecent exposure and driving under the influence, and police officers say he propositioned them.

Tommy Tester, 58, of Bristol, Va., was wearing a skirt when he was arrested last week after allegedly urinating in front of children at a car wash, police said.

Police also said Tester offered to perform oral sex on officers who were sent to the scene.

Authorities identified Tester as the minister of Gospel Baptist Church in Bristol and an employee of Christian radio station WZAP-AM in Bristol.