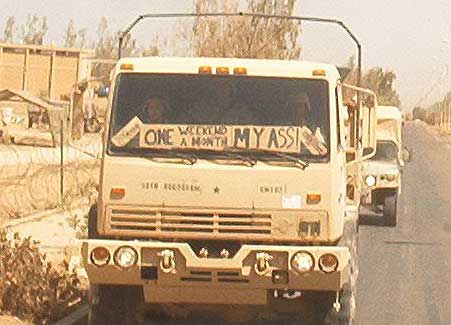 Not that the military’s stretched too thin, mind you:

WASHINGTON, Feb. 21 â€” The Pentagon is planning to send more than 14,000 National Guard troops back to Iraq next year, shortening their time between deployments to meet the demands of President Bushâ€™s buildup, Defense Department officials said Wednesday.

National Guard officials told state commanders in Arkansas, Indiana, Oklahoma and Ohio last month that while a final decision had not been made, units from their states that had done previous tours in Iraq and Afghanistan could be designated to return to Iraq next year between January and June, the officials said.

I’m sure it’s no accident that the new National Guard recruiting ad features a picture of the entire planet, with a tagline that says something to the effect that “If it’s happening here” — i.e., anywhere on the planet — “we’re there.”

(Recycling went out last night but if anybody has a scan of that ad, send it and I’ll post it.)