I’m glad to see the notion of universal health care getting more and more mainstream attention. As a longtime freelancer, it’s an issue that’s been near and dear to my heart for many years. During the early nineties, watching the Clinton plan unfold was like watching a slow-motion car wreck. As Krugman writes today:

But look at what happened to Bill Clinton. He rejected a single-payer approach, even though he understood its merits, in favor of a complex plan that was supposed to co-opt private insurance companies by giving them a largely gratuitous role. And the reward for this â€œpragmatismâ€ was that insurance companies went all-out against his plan anyway, with the notorious â€œHarry and Louiseâ€ ads that, yes, mocked the planâ€™s complexity.

Clinton and his pre-emptive “compromise” set health care reform back for more than a decade. It’s as if he did not comprehend the first principle of negotation: ask for more than you want, so you can be “bargained” down to your true goal. Anybody who’s ever been to a flea market understands that one, but Clinton managed to screw it up.

At any rate, the problem has always been simple: before a patient can see a doctor under the American health care system, an insurance company must first make a profit. Here’s a cartoon on the topic from 1991; here’s another from 2001. Chances are I’ll still be writing about it in 2011. 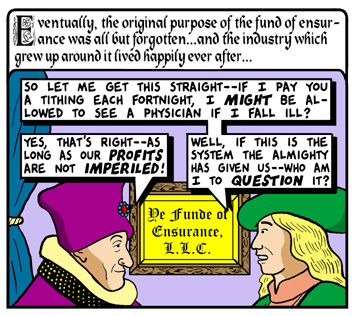