My friend Peter Kuper is currently living in Oaxaca, and this weekend he sent a report from the ground on the turmoil there, along with a couple pages from his sketchbook:

Since you may have been hearing news on Oaxaca, I figured I send you an update straight from the caballo’s mouth…

After almost 6 months of striking it looks like the xit has hit the fan.

Yesterday undercover police “Poros” (thugs working for the governor Ulises) attacked the radio station at the university–the last free radio or TV in Oaxaca) and then in other parts of town started attacking people on the barricades. As you’ve perhaps heard Brad Will, an American journalist who was filming a documentary here, was killed along with a number of other people. A photographer friend of ours was at the scene (I was supposed to meet up with him and was awaiting his call to let me know where things were at since Friday was a huge expanded strike closing the city).

When he finally called he was holed up in a building with other journalists who had hightailed it when the shooting started. In a strange twist (not to be compared with getting shot) I had gone to pick up my daughter from a playdate around that time and got caught in a storm that turned into a flash flood. The streets turned into muddy rivers. With new barricades set up–buses blocking streets–traffic was a snare of confusion in this flood and it was a small miracle the car didn’t stall mid-rio. Suffice to say it was a tension inducing afternoon.

So today(Sat.) the word is Presidente Fox is sending in a police force to remove the barricades and chase the protesters out. They won’t leave without a fight(?) so everyone is holding their breath. The only way Fox can resolve this is to pull the governor Ulises out of power and negotiate with striking teachers/Appo(?) Without this I’m afraid it will be a police state with troops on every corner to keep the disorder in place(?)

As you can see there are alot of questions.

Since we’re not in the downtown area (we’re a whole ten minutes up the hill in San Felipe) we have been safe. Throughout our time here(four months now) these problems have been hanging over Oaxaca, but we have nonetheless been having a fantastic experience. Today we actually had a belated birthday party for my wife. Though many people who would have to pass barricades cancelled, most came and it was a surreal uplifting event in this time of crisis. As the saying goes–better to hang out together then to hang out separately(or something like that.)

The situation is changing by the hour so it is impossible to know what is happening at this point. I know that the troops arrived (One of our friends had to go out to the airport to fetch her Mom and saw the troop planes). Another reliable source said this will give Ulises the thumbs up to send his henchmen on a rampage.I also heard from our photographer friend that Appo will not be fighting and a resolution may be imminent! Another casualty of war–verifiable information. 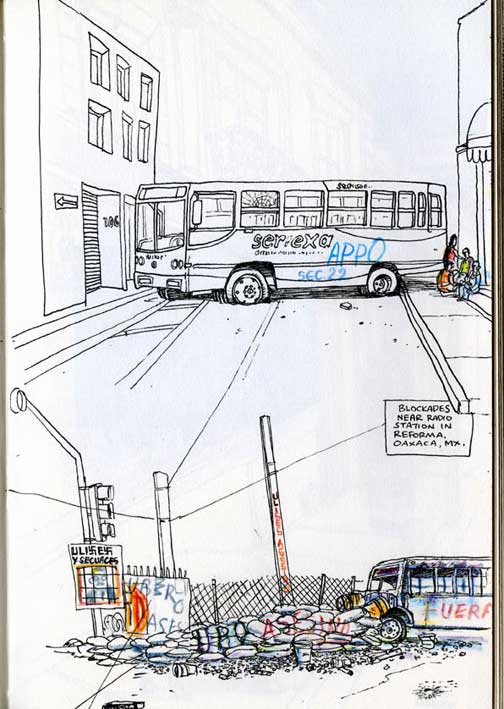 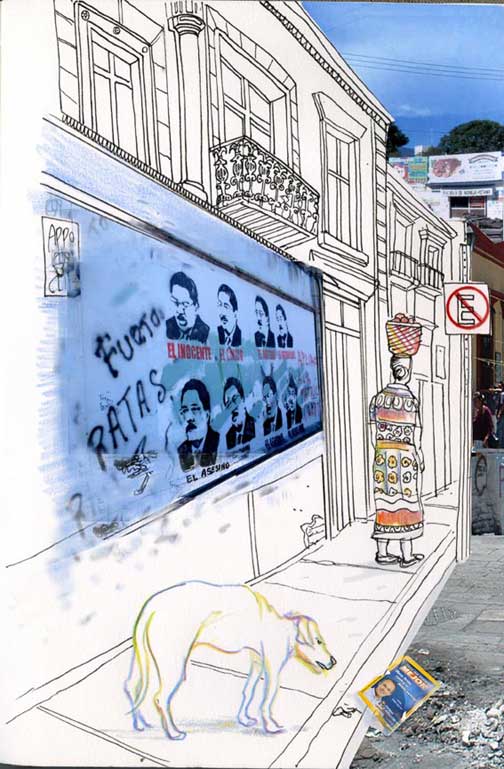 (Some earlier photographs and sketches here.)