I have mentioned before that the New Haven Register is perhaps not the gold standard by which journalism should be judged. A small example: for two days running, the paper has featured on its front page a small controversy brewing in the nearby town of Milford:

City veteransâ€™ groups are calling on the public to boycott a River Street liquor store because the storeâ€™s owner has a small poster in his window that the veterans say demeans soldiers, particularly those serving in Iraq, by suggesting the unemployed should join the Army.

But TJâ€™s Package Store owner Thomas Jakubisyn, who served in the Navy aboard the USS Des Moines before and during the Vietnam War, says his poster has been misunderstood and he wonâ€™t take it down. He says it was put up as a simple protest to the war in Iraq.

The small poster of a political cartoon, depicts a camouflage-clad soldier and says, “Out of Work? Undereducated? No Health plan? Join the Army and see Iraq.”

* * *
The cartoon, by artist Chivast, originally appeared in the New York Times; Jakubisyn says heâ€™s had it up since the war started in 2003.

Okay, so here’s the thing: although he is mentioned in both articles, there is no “artist Chivast”. There is a very well known artist named Seymour Chwast, cofounder of the legendary Pushpin Studios and a frequent illustrator for the New York Times, whose signature features a stylized “W” that — I’ll be charitable here — might be misinterpreted as an “I” and a “V”. Chwast is, of course, the illustrator who created the image in question, to accompany a Frank Rich column from 2003. 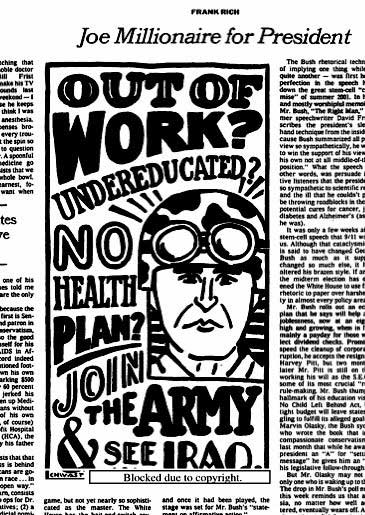 Took me about five minutes to track that down, using information from the Register’s own article. I was able to pinpoint the date of the initial illustration with Google, and then tracked down the actual image with a little help from my wife the academic, who has access to some specialized databases. (They’ve blocked off a small part of the illo “due to copyright” but Chwast’s signature is still clearly visible). Now, presumably the Register has resources at least comparable to those of a cartoonist sitting at home on his butt in front of a computer screen, but even if they don’t, you’d think they might have called someone at the Times to track the artist down, maybe get a quote from him. Front page news, two days running, you’d think a comment from the artist responsible for the controversy would be of some relevance.

At the very least, you’d think they’d try to get his name right.

Incidentally, kudos to Mr. Jakubisyn (assuming they got his name right) for not backing down. If you’re in the area, you should throw some business his way.