Under the heading “Butt Out Markos,” clueless Andy highlights an email from an equally clueless reader:

A couple of thoughts about this.

To start off: This isn’t “playing God.” Playing God involves humanoid creatures stitched together from body parts stolen from the cemetery, towers on craggy peaks, and lightning storms late at night. Oh yes, and near hysterical cries of “IT’S ALIVE!”

This is just, you know, politics.

Sure, Markos and Atrios and Jane Hamsher and other out-of-staters have been supporting Lamont’s run (along with quite a few Connecticut bloggers). So what? I mean, is anyone really so naive as to believe that Senate races are purely local affairs? The 100 individuals in the U.S. Senate have a huge impact on the lives of everyone in the country, not just their own constituents. Joe Lieberman’s backers certainly understand this — 80% of his campaign contributions come from out of state.

(Let me reiterate that for the slower-witted among us, such as Andy’s correspondent: EIGHTY PERCENT OF JOE LIEBERMAN’S CAMPAIGN CONTRIBUTIONS COME FROM OUT OF STATE.)

Also, the last I checked, Bill Clinton — who came up and stumped for Lieberman the other day — is not himself a resident of the state of Connecticut.

But opposition to Lieberman runs deeper than some out-of-state bloggers. Drive around this state, Lamont yard signs seem to outnumber those of Lieberman by maybe twenty to one. You see them everywhere, even hanging from clotheslines: 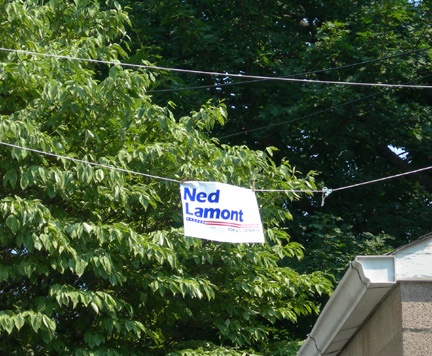 And I’m second-hand sourcing this one, but according to a friend-of-a-friend who is deeply involved in local party politics, resentment of Joe within the Democratic machine here runs deep and long. Joe’s just annoyed too many people over the years, and there’s apparently a sense among local politicos that he’s spent too much time in DC sucking up to the Bushies the last few years, and far too little at home. (In other words, as Markos correctly notes, he hasn’t been tending to his constituents.)

This could all be nonsense, of course. But if Lieberman loses on August 8, watch and see if there’s not a sudden and enthusiastic outpouring of support for Lamont from local Democrats who have been forced to bite their tongues up to now.

I know that this is contrary to the official media narrative of the moment, but Lamont’s unexpectedly strong showing has a lot more to do with Connecticut Democrats being tired of Joe, and finally having a credible alternative, than it has to do with a handful of out of state bloggers.

One last thing: you hear a lot from lazy media types about how very popular Joe is here in Connecticut. Well, here’s a small reality check: in the 2004 Super Tuesday presidential primary in Connecticut, John Kerry got 58% of the vote. John Edwards came in second with a respectable 24%.

Joe Lieberman, meanwhile, came in third with five percent of the vote, here in the state in which he is so very popular.

(As for Lieberman “crushing” Lamont in a three-way race, check out these numbers from a 7/20 Rasmussen poll of likely voters: Lieberman 40, Lamont 40, Schlesinger 13. I have no idea how a three-way race would really play out, of course, but if I were Lieberman I wouldn’t start planning the victory celebration quite yet.)