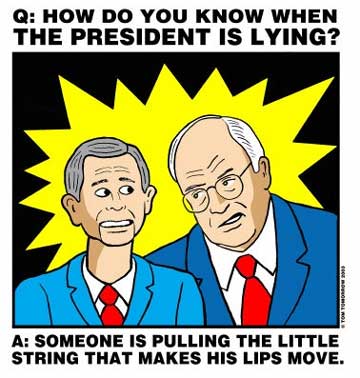 The image above (which is available on t-shirts and mouse pads and many other fine varieties of swag in the store) is taken from a cartoon that ran back when the world was young, in June of 2001.

As it turns out, I was more right than I knew. From the NY Times review of Ron Suskind’s new book:

This book augments the portrait of Mr. Bush as an incurious and curiously uninformed executive that Mr. Suskind earlier set out in “The Price of Loyalty” and in a series of magazine articles on the president and key aides. In “The One Percent Doctrine,” he writes that Mr. Cheney’s nickname inside the C.I.A. was Edgar (as in Edgar Bergen), casting Mr. Bush in the puppet role of Charlie McCarthy, and cites one instance after another in which the president was not fully briefed (or had failed to read the basic paperwork) about a crucial situation.