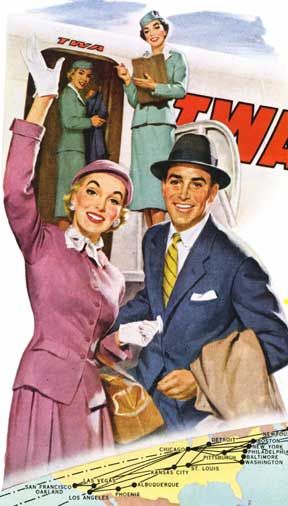 According to the Times this morning, Airbus is experimenting with ways to make air travel even more closely resemble a rush hour subway ride:

The airlines have come up with a new answer to an old question: How many passengers can be squeezed into economy class?

A lot more, it turns out, especially if an idea still in the early stage should catch on: standing-room-only “seats.”

Airbus has been quietly pitching the standing-room-only option to Asian carriers, though none have agreed to it yet. Passengers in the standing section would be propped against a padded backboard, held in place with a harness, according to experts who have seen a proposal.

Yes, you read that right. A standing section, as the Times illustrates with this helpful graphic: 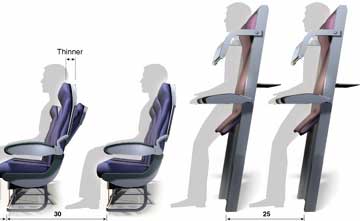 I’ve done a few cartoons about the indignities of air travel over the years — both pre- and post-9/11 — but I have to admit, the concept of a standing section on airplanes never occurred to me.

Fortunately, it doesn’t appear that the idea is exactly “taking off” (ha! ha! humor is my business!) with airlines, at least so far:

The two Asian airlines seen as the most likely to buy a large plane for short-haul flights, All Nippon Airways and Japan Airlines, are lukewarm about the Airbus plan.

“Airbus had talked with us about an 800-seat configuration for domestic flights,” said Rob Henderson, a spokesman for All Nippon Airways. “It does not fit with our present plans going forward.”

That doesn’t mean that anyone is spending a whole lot of time worrying about how to make steerage class passengers more comfortable, of course.

But even short of that option, carriers have been slipping another row or two of seats into coach by exploiting stronger, lighter materials developed by seat manufacturers that allow for slimmer seatbacks. The thinner seats theoretically could be used to give passengers more legroom but, in practice, the airlines have been keeping the amount of space between rows the same, to accommodate additional rows.

* * *
“We make the seats thinner,” said Alexander Pozzi, the director for research and development at Weber Aircraft, a seat manufacturer in Gainesville, Tex. “The airlines keep pitching them closer and closer together. We just try to make them as comfortable as we can.”

* * *
One of the first to use the thinner seats in coach was American Airlines, which refitted its economy-class section seven years ago with an early version made by the German manufacturer Recaro.

“Those seats were indeed thinner than the ones they replaced, allowing more knee and legroom,” Tim Smith, a spokesman for American, said. American actually removed two rows in coach, adding about two inches of legroom, when it installed the new seats. It promoted the change with a campaign called “More Room Throughout Coach.”

But two years later, to cut costs, American slid the seats closer together and ended its “More Room” program without fanfare.

Boeing is under similar pressure to squeeze more seats onto its newest aircraft, the midsize Boeing 787. Some airlines are planning to space the seats just 30 inches apart from front to back, or about one inch less than the current average.

And rather than installing eight seats across the two aisles, which would afford passengers additional elbow room, more than half of Boeing’s airline customers have opted for a nine-abreast configuration in the main cabin, said Blake Emery, a marketing director at Boeing. Even so, he said, “It will still be as comfortable as any economy-class section today.”

I suppose that last bit is technically true, in the sense that economy class sections today are not remotely comfortable to begin with, so squeezing in another seat will not make them any more so. 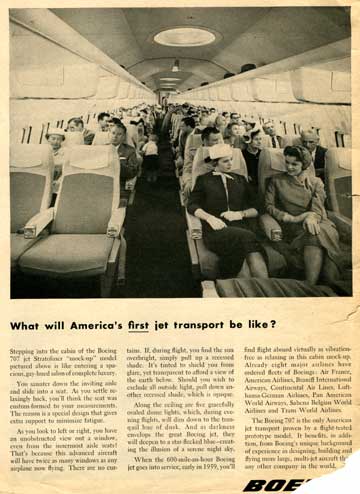