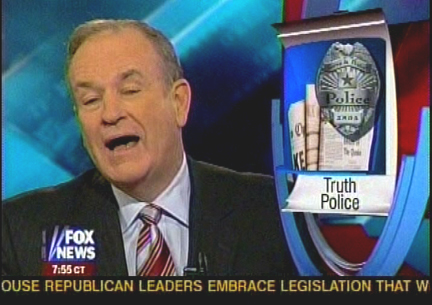 That’s what the graphic behind Bill O’Reilly read tonight as he complained about the way in which a newspaper called the East Valley Tribune characterized a column of his (apparently, a twig does not fall that O’Reilly is unaware of, at least if it whispers unfavorably of him on its way to the forest floor)*: 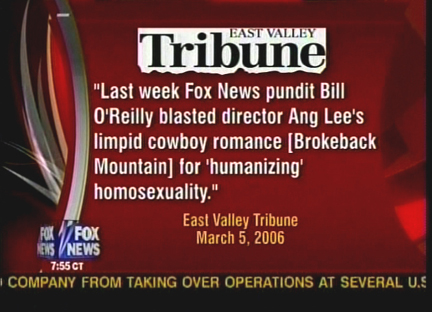 In an attempt to present himself as an unfairly maligned paragon of tolerance, this is what Bill O’Reilly says he actually wrote: 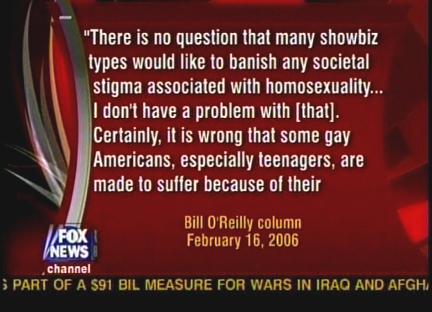 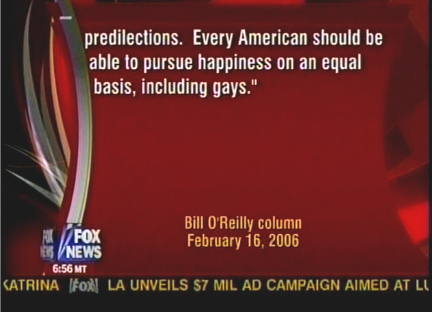 And this is the somewhat more nuanced column that Bill O’Reilly actually did write:

The old American west was a place where men were men, and women were, well, in short supply. I mean, covering thousands of miles in a dusty covered wagon wasn’t exactly an enchanting experience for the ladies. Don’t even ask about the plumbing.

But the new American west is a bit different, at least according to the new widely praised film “Brokeback Mountain.” I haven’t seen the movie because the lead actors play bisexual shepherds and, please forgive me, that isn’t on top of my viewing wish list. I understand I’m a barbarian.

According to friends of mine who have seen “Brokeback,” the key scene takes place in a pup tent. Apparently, two shepherds “bond” in said tent. If I do see the movie, I know what will run through my mind during that scene: What would Clint and Lee and Eli have done, had they stumbled upon the tent? I believe gunfire might have been involved.

These days, Hollywood considers itself not only a place of entertainment, but also a cultural trendsetter. There is no question that many showbiz types would like to banish any societal stigma associated with homosexuality. Thus, a mainstream movie that portrays gay conduct as nuanced and complicated, as “Brokeback” reportedly does, contributes to a more broadminded approach to homosexuality–a more accepting view.

So that’s what’s in play this year at the Academy Awards–a social and political statement. And that’s why Star Wars and Harry Potter and Narnia, the three largest grossing movies of the year, are not in the best picture running. Spectacular movies often make tons of money, but they do not advance any cause. Gone are the days when “Gone With the Wind”-type entertainment ruled the Hollywood day.

So how should we process the current Hollywood award process? Well, I don’t have a problem with it. Certainly, it is wrong that some gay Americans, especially teenagers, are made to suffer because of their predilections. Every American should be able to pursue happiness on an equal basis, including gays.

But I also think the entertainment industry should be up front in explaining what films it values and why it finds them especially worthy. Most Americans are not gonna see “Brokeback Mountain” because they don’t relate to the subject, and if Hollywood is now in the “culture-shaping business,” it should admit it.

So look for Oscar night to be a huge night for shepherds who roam the range in their own consensual way. Hollywood is making a statement and Americans should be geting the message loud and clear.

*Hi, Bill! Thanks for stopping by the site!