—Victories in the war on terror:

One is a second grader in Manhattan. Over the protests of his American mother, immigration officials have been trying to deport him ever since he returned from a brief visit to his native Canada without the right visa. Another is an Irish professor of literature invited to teach at the University of Pennsylvania last month. He was handcuffed at the Philadelphia airport, strip-searched, jailed overnight and sent back to Europe to correct an omission in his travel papers.

Then there are the seven Tibetan monks who were visiting Omaha two weeks ago. After their church sponsor abruptly withdrew its support, their religious visas were revoked and a dozen immigration officers in riot gear showed up to arrest them.

–In case you missed it, the guest post from Iraq vet Tomas Young is well worth reading.

–A review of the new Neil Young concert movie by Jonathan Demme, here. This was filmed over two nights at the Ryman Auditorium in Nashville last August. The concerts were closed to the public, but I had the great good fortune of attending both nights, thanks to my friend Louis Black (who is not the comedian), and the greater good fortune of meeting both Demme and Neil Young. Sitting in the third row, I felt like I was attending a private concert in Neil’s living room. Imagine the best concert you’ve ever been to, and imagine that it was immortalized on film. That’s how I feel about this one, and I haven’t even had a chance to see it yet. 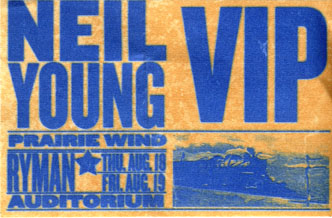