This week’s cartoon was the one that I originally wrote for the New York Times op ed page, but decided to pull upon being notified, late in the process, that the op ed page no longer allows caricature. I discussed the situation at greater length here, but the short version is that the Times felt the piece was salvagable without using identifiable images of politicians. They suggested that it would work just as well with a picture of the White House, or by representing Bush and Cheney as figures speaking from the shadows.

This is the ‘rough’ version of the piece as submitted to the Times: 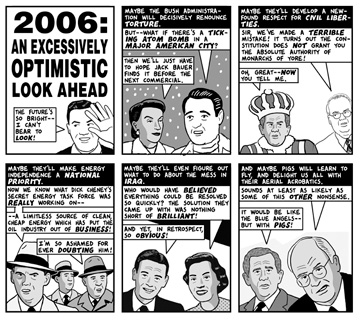 You can see a larger version by clicking on the image. You’ll notice that I changed a few things before using the piece in my weekly strip — the woman in panel two is replaced by Sparky; in panel three, Bush changes from a would-be king to a decadent Roman emperor; and I tweaked the wording here and there. But for all practical purposes, it’s the same cartoon that I sent out this week.

So. Let’s take a closer look at the third panel, as it appeared in my final piece: 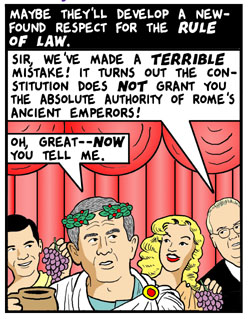 Okay, now let’s see how well that would work if I were to forego the use of caricature, and simply insert a picture of the White House: 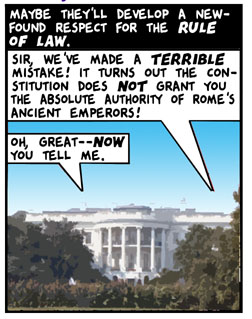 The joke kind of loses some of the impact, doesn’t it?

Similarly, the final panel pretty much hinges on the immediate recognition of Cheney growling and Bush looking somewhat blank and idiotic: 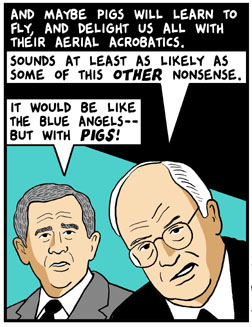 But just for fun, let’s try it with Bush and Cheney obscured by shadow: 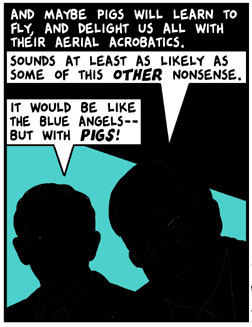 Again, not quite the same.

I suppose I could have rewritten the panels entirely, but I’d already put too much work into the piece as it was — and as I said before, there sometimes comes a point where you just really don’t feel good about obliging such foolishness with cheerful acquiesence. Of course, maybe I’m just a cranky sonofabitch.