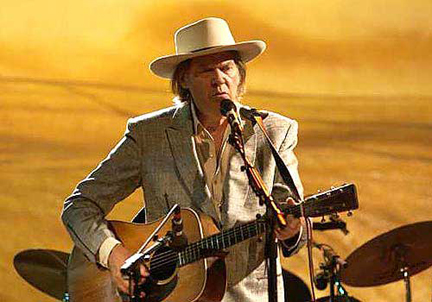 Every Neil Young album arrives with a question: which Neil this time? the folkie? The grunge progenitor? The acoustic country guy? Or the avant-gardist whose sonic violence can make instruments — and sometimes fans — cry out for mercy? For his 31st album, Prairie Wind, out Sept. 27, it’s yet another Neil Young: a mortal one. In March, Young was told he had a brain aneurysm, and Prairie Wind poured out of him in the week between diagnosis and his undergoing surgery. Naturally, there are songs about death and loneliness, but the album, one of the most melodic of his career, also deals with religion, family and the good times he remembers growing up on the Canadian steppes.

I haven’t had a chance to pick up the CD yet, but I did have the extraordinary privilege of being introduced to the songs for two nights running in Nashville’s historic Ryman Auditorium. The shows were filmed by Jonathan Demme for a film that should be out later in the year — in fact, that was the entire reason they were held, and as such, they weren’t open to the public. Fortunately for me, I have a friend with friends in high places, so I made it in — third row, center stage. That picture up above was pretty much the view from my seat. For a lifelong Neil Young fan, it was extraordinary. But I don’t really write about music, and rather than make a clumsy attempt to do so, I’m going to turn it over to my friend Louis:

I saw the show three times — one run-through and two performances. Given that I have the attention span of a gnat, I’m usually not given to attendance at multiple shows, even of favorite artists, but on Friday night at the end of the second performance I was ready to come back again the next night. The Ryman, former home of the Grand Ole Opry, is one of the great music halls in this country, especially, though not only, in regard to ambience, intimacy, and acoustics. Several times Young commented that he felt like he was inside a guitar.

The show unfolded over the course of the evening, Young accompanied by 30 or more musicians on stage at one time or another. They came on, they exited, they returned in a different configuration, switching instruments and positions. Watching Young during the run-through performance is extraordinary, his sense of music broken down to every instrument without losing sight of the sweep of the work. He sees the forest for the trees, noting the smallest detail without losing any sight of the grandest ambition.

This is not going to be Neil Young’s Stop Making Sense. Demme and Young were both working on a grander, less focused tableau where the excitement is visceral if not as immediate, the richer pleasures derived cerebrally from lyric, history, and juxtaposition. Still, it works so beautifully musically that it would hit the groove if there were nothing else to it.

But there is: watching Neil and Pegi Young smile at each other. This is a work about mortality and friendship, about romance and sadness, about everyday love and family, about history, the present and the future, the land and its people, Canada and the United States.

Emmylou Harris joined Young on a number of songs. Ben Keith played steel guitar throughout. Other players included guitarist Grant Boatright, drummer Chad Cromwell, keyboardist Spooner Oldham, bassist Rick Rosas, and fiddler Clinton Gregory. The Fisk University Jubilee Singers, the Nashville String Machine, and a horn trio led by Wayne Jackson of the Memphis Horns also joined the fun at different points. Usually they would join for whole songs, but the choir came out part way into a song to join in, and the string section made an appearance in the middle of a song to play on a section and then left.

The staging was ideal, only a few different backdrops, the lighting superb, and the clothing from Manuel’s — suits that are hip and retro. The performance looked like an early photo process color postcard, a 1940s traveling country & western show as well as an almost too trendy modern cocktail bar.

Prairie Winds is an exquisite journey; I can’t begin to talk about it as a concert. It was something so much bigger, finally reminding me of nothing so much as Brian Wilson’s Smile, the entire concert of a piece. Rather than resurrecting a lost, never-finished album, this was a whole new creation. And not just Prairie Wind; the older songs were equally important in shaping a cohesive whole. Young wrote these songs for the times in which they were composed and the albums on which they appeared. Still, it was like Smile in the way it combined the known and the new, memory and dreams. Songs and even just pieces of songs and/or music from Smile ended up on at least a half dozen other Beach Boy albums. Listening, you knew them as distinct songs. The revelation was in how they fit together. The same was true of Young’s performances, songs like “Old Man,” “Needle and the Damage Done,” and “Comes a Time” perfectly crafted for this mosaic, feeling born to their place rather than shoved in or just played randomly for an encore. The older songs finally seemed at home: All the music together formed a startlingly mature work that, while denying none of life’s tragedies, insisted that the direction is forward.

There’s much more, if you follow the link. And Scott Simon interviews Young here.