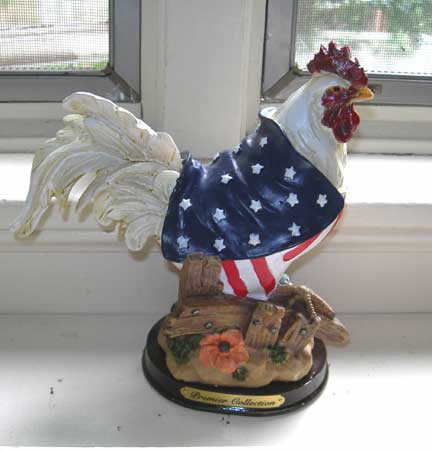 Operation Yellow Elephant is having a contest.

Create signs relating to Operation Yellow Elephant’s mission to expose the hypocrisy of hawkish College Republicans and other young conservatives who are too cowardly to fight in the war they demanded. Post these signs near roadways and pedestrian pathways on or near college campuses. Photograph your work and send it to me. I’ll post them here. In early October, the OYE Contributing Writers and the Freeway Blogger will pick a winner.

They’ve got fabulous prizes, too.

On a related note, Steve Gilliard is handing out medals, here, here and here.

And while I’m on the topic…there’s been an attempt lately to counter the ‘chickenhawk’ meme with a fairly obvious straw man — are you saying that only people with military experience are entitled to have opinions? It’s a feeble attempt to deflect attention from the real question: how you can sleep at night if you really and truly believe the war is a necessary thing, as long as it is fought by others? Hell, most of these people would probably scream bloody murder if you even tried to rescind their tax cuts to help offset the expense of this fucking war.

Finally: that strange image at the top of this post is something I picked up in a souvenir shop in Nashville. It’s also my gift to any blogger looking for an apporopriate graphic on this topic — take it, it’s yours.