A paragraph from the NY Times’ lead editorial this morning:

Most Americans believed that their country had invaded Iraq to eliminate weapons of mass destruction, but we know now that those weapons did not exist. If we had all known then what we know now, the invasion would have been stopped by a popular outcry, no matter what other motives the president and his advisers may have had.

A couple of problems here. First: if most Americans really did believe that Iraq had WMD’s, the Times itself bears no small responsibility for that regrettable misapprehension — Judith Miller’s front-page channelling of Ahmed Chalabi’s unsubstantiated propaganda points surely helped convince more than a few fence-sitters of the imminent danger Saddam allegedly posed.

And second — as for the popular outcry that could have arisen, if only the sensible readers of the New York Times had understood that the Administration was lying…well, in this case a picture (from mid-February, 2003) really is worth a thousand words: 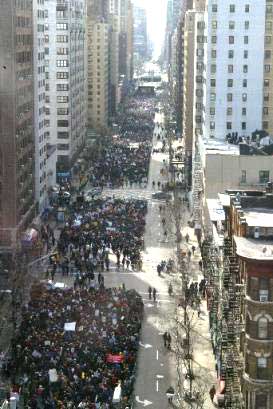