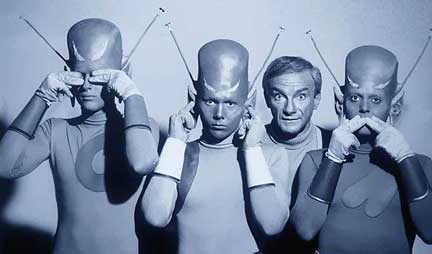 Update: I posted this before reading Billmon’s latest, below, and unwittingly reposted some of the same source material. Sorry about that.

Secular Iraqis,, who presumably have some passing familiarity with the situation, are concerned about the new constitution for any number of reasons:

BAGHDAD, Iraq, Aug. 23 – Some secular Iraqi leaders complained Tuesday that the country’s nearly finished constitution lays the groundwork for the possible domination of the country by Shiite Islamic clerics, and that it contains specific provisions that could sharply curtail the rights of women.

The secular leaders said the draft, which was presented to the National Assembly on Monday, contains language that not only establishes the primacy of Islam as the country’s official religion, but appears to grant judges wide latitude to strike down legislation that may contravene the faith. To interpret such legislation, the constitution calls for the appointment of experts in Shariah, or Islamic law, to preside on the Supreme Federal Court.

The draft constitution, these secular Iraqis say, clears the way for religious authorities to adjudicate personal disputes like divorce and inheritance matters by allowing the establishment of religious courts, raising fears that a popularly elected Islamist-minded government could enact legislation and appoint judges who could turn the country into a theocracy.

The courts would rely on Shariah, which under most interpretations grants women substantially fewer rights than men.

Language reserving a quarter of the Assembly’s seats for women has been relegated to a section of the constitution labeled transitional, which is of uncertain legal force and duration. Another phrase declares that education is mandatory only through elementary school. Women’s rights groups, which expressed concern about lower levels of literacy among women here, wanted middle school to be declared mandatory as well, but were defeated.

Right wing bloggers, meanwhile, are busily burning up the keyboards, explaining — from the comfort of their various suburban abodes — why the secular Iraqis are wrong to be concerned, because from their reading of the draft constitution, it looks like everything is going to work out great.

These are, of course, the same people who burned up previous keyboards discussing the indisputable fact of Saddam’s WMD’s, the inevitable rose petals with which our troops would be greeted, etc., etc. — not to mention all the reasons that people who opposed the war were wrong, wrong, wrong (even as the passage of time has inexorably proven us right, right, right).

You’d think they’d be embarrassed at some point. Or at that very least, you’d think they’d learn to start using a few cautious qualifiers. But you’d be thinking like a reality-based person, and as we all know, war proponents have nothing but contempt for that sort of thing.