Staff Sgt. Jason Rivera, 26, a Marine recruiter in Pittsburgh, went to the home of a high school student who had expressed interest in joining the Marine Reserve to talk to his parents.

It was a large home in a well-to-do suburb north of the city. Two American flags adorned the yard. The prospect’s mom greeted him wearing an American flag T-shirt.

“I want you to know we support you,” she gushed.

Rivera soon reached the limits of her support.

And that’s the problem, isn’t it? Americans always want something for nothing. You know the old saying: everybody wants to go to heaven, nobody wants to die.

I was listening to some right wing radio guy and his producer talking about how silly the chickenhawk argument is — the latter apparently young enough to enlist for military duty but uninterested in doing so, regurgitating the standard Jonah Goldberg argument: I’m flabby, I have other things to do, I wouldn’t make a good soldier anyway. Well, gosh, that is a compelling argument — you guys go die, you’re much better at it than me, I’ll just stay here and wave the flag — but really, this fellow shouldn’t let poor self-esteem hold him back. After all, isn’t that what boot camp is all about? After nine weeks of basic training, I’m sure he’d feel a lot better about his own abilities.

The producer did allow that if this were a World War II-style conflict, and his country really needed him, he’d be more than willing to serve. In the meantime, I guess he’ll continue to support the war wholeheartedly, while guys like this pay the price: 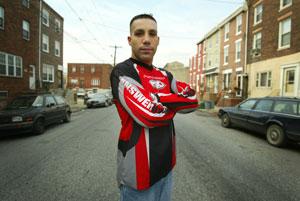 “I just want to get it done, come home, and continue my life.”

Those were just about the last words that Gennaro Pellegrini, Jr. — a 31-year-old Philly cop and up-and-coming boxer — said to us when we spoke last last November. In less than 48 hours, Pellegrini was about to step onto an airplane bound for Iraq, along with the rest of his Pennsylvania National Guard unit from Northeast Philadelphia.

For anyone who’s worried about the return of a military draft, Pellegrini was living proof that we already have one in George W. Bush’s America. He desperately did not want to serve in the Persian Gulf.

He was just two weeks away from finishing up his six-year stint in the Guard when he was told that his tour of duty was being extended and that he would serve in Iraq for at least a year, maybe longer. The news could not have come at a worse time for Pellegrini. He was training for his first pro fight, newly engaged to be married, and settling into his job as a Philadelphia police officer, just like his dad.

Instead, he was ordered by his government to fight a war that he did not believe in. He told us that the conflict in Iraq was “a so-called war” and that he saw U.S. troops as caught in an impossible situation.

In the end, Pellegrini’s stay in Iraq lasted little more than eight months. This morning, his parents were notified that he had been killed in action. So far, no specifics have been released — but when we learn more we will post it.

There is so much sadness, and so much irony. The news of his death comes at the very same time that a right-wing slime machine is trying to put words in the mouth of a dead Marine, 24-year-old Casey Sheehan. They have engaged in obscene speculation that he would not have wanted his mother Cindy Sheehan — the anti-war protester now camped outside the Bush compound in Crawford, Texas — speaking out.

Speaking of which…I have no doubt that Cindy Sheehan — who has paid the biggest price a parent can pay — will continue to be attacked by people who think they’re doing all they can by putting ribbon magnets on their SUVs. (And isn’t that ultimately the pefect metaphor for this war and its supporters? Think about it: it’s a magnet. Peel it off and it’s as if it was never there. You can support the troops and not even risk the slightest damage to the finish of your car. That’s real commitment.)

But Cindy Sheehan can speak for herself:

People have asked what it is I want to say to President Bush. Well, my message is a simple one. He’s said that my son — and the other children we’ve lost — died for a noble cause. I want to find out what that noble cause is. And I want to ask him: “If it’s such a noble cause, have you asked your daughters to enlist? Have you encouraged them to go take the place of soldiers who are on their third tour of duty?” I also want him to stop using my son’s name to justify the war. The idea that we have to “complete the mission” in Iraq to honor Casey’s sacrifice is, to me, a sacrilege to my son’s name. Besides, does the president any longer even know what “the mission” really is over there?

Casey knew that the war was wrong from the beginning. But he felt it was his duty to go, that his buddies were going, and that he had no choice. The people who send our young, honorable, brave soldiers to die in this war, have no skin in the game. They don’t have any loved ones in harm’s way. As for people like O’Reilly and Hannity and Michelle Malkin and Rush Limbaugh and all the others who are attacking me and parroting the administration line that we must complete the mission there — they don’t have one thing at stake. They don’t suffer through sleepless nights worrying about their loved ones.