I actually lived there, for three years in the early seventies — right at the height of the oil embargo. Spent a lot of time with my mom waiting in gas lines. The six inch long flying cockroaches made quite an impression too, as did the constant reports of alligators and walking catfish climbing out of the canals that cut through many back yards. Even with all of that, I should say that I was quite taken with it all — to a wide-eyed midwestern kid it was pretty extraordinary to have a palm tree out front and an orange tree in the back and a friend (whose family was, like ours, lower middle class at best) with a swimming pool. Not to mention the temperate weather on Christmas day.

TALLAHASSEE, Fla. (Reuters) – People in Florida will be allowed to kill in self-defense on the street without trying to flee under a new law passed by state politicians on Tuesday that critics say will bring a Wild West mentality and innocent deaths.

The Florida House of Representatives, citing the need to allow people to “stand their ground,” voted 94-20 to codify and expand court rulings that already allow people to use deadly force to protect themselves in their homes without first trying to escape.

The new bill goes further by allowing citizens to use deadly force in a public place if they have a reasonable belief they are in danger of death or great bodily harm. It applies to all means of force that may result in death, although the legislative debate focused on guns.

In other Florida news, reader Richard M. sends this photo of the mermaids (and mermen, apparently) at Weeki Wachi performing what is presumably their post-9/11 finale — an underwater “Tribute to America” featuring Lee Greenwood’s ubiquitious “Proud to be an American.” 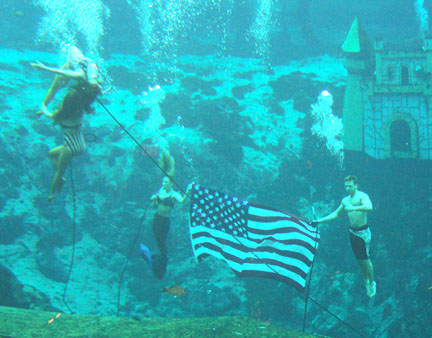