That was the refrain in 2000 — the more ridiculous things got, the more the talking heads on tv insisted that it was all “proof the system works.” I literally heard one of the CNN biggies declare that the lack of rioting in the streets was, yes, “proof the system works.” It’s the same thing that happens whenever the stock market goes into a decline and the various financial “experts” are all over the cable nets “talking the market up,” reassuring investors that everything’s fine, there’s no reason to worry — when in fact there’s probably very good reason to worry. In the same way, Wolf and Judy and the gang seemed to feel it was their duty to talk democracy up — to reassure voters that we’d just hit a little snag in the road, but there was no real cause for concern. At the same time, though most attention was focused on Florida, reports of voting irregularities started coming in from all over the country, and I got to thinking about just how approximate our democracy is, and wrote the cartoon below. 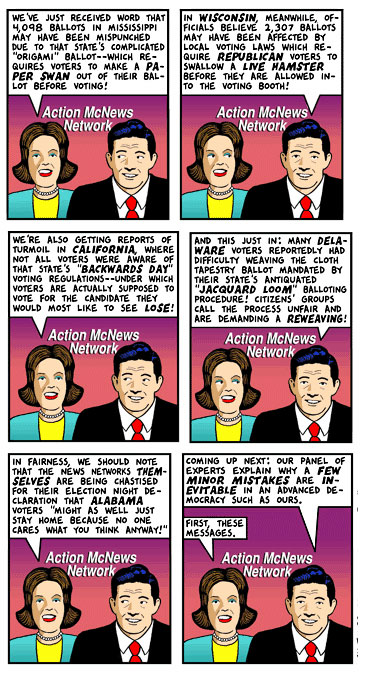 I intended this one as over-the-top satire, but as so often has been the case these past few years, reality has surpassed my feeble efforts, and I fear it may turn out to be a fairly accurate representation of Election Day, 2004. (Well, maybe not the part about eating live hamsters, but you get the idea.) We’ve been hearing disturbing reports of attempted voter suppression for weeks now, and I suspect the fun is only beginning. (An advance heads up, incidentally: my friend Jack Hitt is working on what sounds like an extraordinary piece on voter suppression for This American Life, which is set to air this weekend. I’m probably not supposed to say too much about it, but he has some really astonishing interviews, and I strongly recommend you make a point of listening.)

Anyway, we’ll probably be seeing quite a lot of “proof the system works” over the next six days. Here’s the latest, from this morning’s Tampa Bay Tribune:

The Republican Party said Tuesday that it may equip its Florida poll watchers with lists of voters whose registrations appear fraudulent, then use a little- known section of state law to try blocking them from voting as they arrive at the polls.

Democrats quickly denounced the unprecedented tactic but did not rule out the possibility that they, too, may file eligibility challenges next week.

With both sides amassing armies of lawyers, the prospect of the fight working its way into neighborhood polling stations is frightening county elections supervisors because the arcane procedure is so unwieldy it could shut down entire stations each time it is exercised.

Two e-mails, prepared for the executive director of the Bush campaign in Florida and the campaign’s national research director in Washington DC, contain a 15-page so-called “caging list”.

It lists 1,886 names and addresses of voters in predominantly black and traditionally Democrat areas of Jacksonville, Florida.

An elections supervisor in Tallahassee, when shown the list, told Newsnight: “The only possible reason why they would keep such a thing is to challenge voters on election day.”