Yesterday we got two peeks under that shroud. One was The Times’s report about what the International Atomic Energy Agency calls “the greatest explosives bonanza in history.” Ignoring the agency’s warnings, administration officials failed to secure the weapons site, Al Qaqaa, in Iraq, allowing 377 tons of deadly high explosives to be looted, presumably by insurgents…

Informed sources quoted by the influential Nelson Report say explosives from Al Qaqaa are the “primary source” of the roadside and car bombs that have killed and wounded so many U.S. soldiers. And thanks to the huge amount looted – “in a highly organized operation using heavy equipment” – the insurgents and whoever else have access to the Qaqaa material have enough explosives for tens of thousands of future bombs.

So, to summarize: Iraq had no WMDs, no nuclear weapons or biological agents with which to wreak havoc on far away lands. But there were large stockpiles of conventional explosives, and because the Bush administration ignored the warnings of weapons inspectors, they ended up in the hands of terrorists who are using them against US troops who were allegedly sent to Iraq in order to reduce the threat of terrorism. With us so far?

And then there’s this:

An article in yesterday’s Wall Street Journal confirmed and expanded on an “NBC Nightly News” report from March that asserted that before the Iraq war, administration officials called off a planned attack that might have killed Mr. Zarqawi, the terrorist now blamed for much of the mayhem in that country, in his camp.

Citing “military officials,” the original NBC report explained that the failure to go after Mr. Zarqawi was based on domestic politics: “the administration feared destroying the terrorist camp in Iraq” – a part of Iraq not controlled by Saddam Hussein – “could undermine its case for war against Saddam.” The Journal doesn’t comment on this explanation, but it does say that when NBC reported, correctly, that Mr. Zarqawi had been targeted before the war, administration officials denied it.

I watch these guys claim that John Kerry isn’t fit to lead the war on terror, and I just keep thinking of that line from The Usual Suspects: the greatest trick the devil ever pulled was convincing the world he didn’t exist. The greatest trick these guys ever pulled is convincing the country that Bush is fit to lead. Things aren’t going to get better right away — when John Kerry wins, he’s going to inherit a real mess. Nonetheless, this blogger has it exactly right. It’s a very simple choice next Tuesday — you’re either for this or against it: 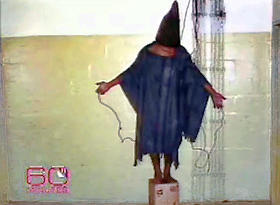