Here’s my original photo of O’Reilly and Michael Moore outside the Fleet Center:

Here’s the version that ran on Drudge’s site — with photo flopped, red light changed to green, and other changes detailed a couple of posts back: 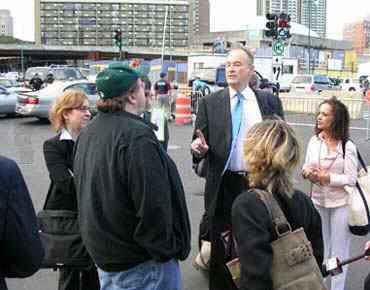 (It’s still up on his site here, at least as of this writing.) (UPDATE: as I expected, the altered version of my photo mysteriously disappeared from Drudge’s archive after I posted this link. But here’s a cached version thanks to the wonder of Google. And I’ve got a screen cap in case this one disappears too.) (UPDATE: cache is gone, screen cap is here.)

And just in case there’s any doubt in your mind, here’s Drudge’s altered photo, flopped back to its original, proper orientation: 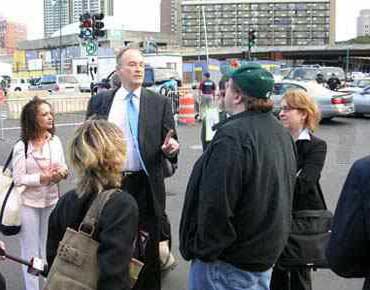 So basically, rather than just give a leftie cartoonist a small photo credit, he steals the picture and goes to the trouble of changing a red traffic light to green, flopping the image and altering traffic signs, all presumably in a clumsy attempt to give himself some sort of imagined plausible deniability.